Miniature donkeys are 36" and under at the withers. The most common colour is grey/dun. Other colours are brown, spotted, red and black. Like all donkeys most have the cross on their backs.

The overall appearance of a miniature donkey is of a small, compact, well proportioned animal that resembles a small draft donkey. It should have a sweet sociable disposition. It is very important that those wishing to breed AMMDs are familiar with the "National Miniature Donkey Association Breed Standard". This standard is meant to assist people interested in the stewardship of the AMMD with the aim of passing on healthy, vigorous and fully functional animals for the generations that follows. 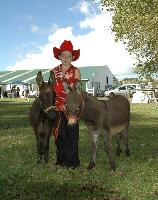 History
Miniature donkeys are members of the equine family. They are native to the Mediterranean Islands of Sicily and Sardinia and are properly called Miniature Mediterranean Donkeys. It is important to note that these donkeys were not bred down to miniature size but are a proper miniature breed. They were first imported into America in 1929 by Mr Robert Green. He is quoted as saying, "Miniature donkeys possess the affectionate nature of a New Foundland, the resignation of a cow, the durability of a mule, the courage of a tiger and the intellectual capability only slightly inferior to man's". Other imports from the Mediterranean followed and over the years some lines were mixed with other small donkeys to become what is known today as Miniature Mediterranean Donkeys. The first imports of these donkeys in to New Zealand were in 1997.

Caring for your Miniature Donkey
Donkeys can live a long time; thirty years plus is quite normal for an animal that is well cared for.

The most important requirement of all who acquire an animal of any sort is to be aware of their responsibility for that animal and its welfare. To buy a donkey, put it in a paddock and forget about it, is to neglect that responsibility.

The book Donkey Business III,[currently out of print] available from the Donkey & Mule Soc. Of NZ will cover all the above points in great detail. We thoroughly recommend reading this.

We strongly believe in gelding most of our jack foals and only the very best will be kept for breeding. Geldings make the best pets. They are easy to handle and train. Never buy a jack as a pet! They need a confident, knowledgeable owner who can provide for their special needs.

Jennies should not be bred until their third birthday. Jennies will carry a foal for 11 to 13 months. Weaning is usually done at six months old.